An orgy of all things cowboy and cowgirl, the annual Calgary Stampede brings around a quarter of a million spectators and participants to the city for ten days during the middle two weeks of July. This is far more than a carefully engineered gift to Calgary's tourist industry, however, for the event is one of the world's biggest rodeos and comes close to living up to its billing as "The Greatest Outdoor Show on Earth". During "The Week", as it's known by all and sundry, the city loses its collective head; just about everyone turns out in white stetsons, bolo ties, blue jeans and hand-tooled boots, addressing one another in a bastardized cowboy C&W; slang.

But for all its heavily worked visitor appeal, the competition end of things is taken very seriously. Most of the cowboys are for real, as are the injuries - the rodeo is said to be North America's roughest - and the combined prize money is a very serious $500,000. Even the first show in 1912, masterminded by entrepreneur Guy Weadick, put up $100,000 (raised from four Calgary businessmen) and attracted 60,000 people to the opening parade, a line-up that included 2000 aboriginal people in full ceremonial rig and Pancho Villa's bandits in a show erroneously billed as a swan song for the cowboy of the American West ("The Last and Best Great West Frontier Days"). Around 40,000 daily attended the rodeo events (today's figure is 100,000), not bad considering Calgary's population at the time was only 65,000.

Nowadays the events kick off on Thursday evening at Stampede Park with a show previewing the next ten-days' events. Next day there's the traditional parade , timed to begin at 9am, though most spectators are in place along the parade route (which is west along 6th Ave from 2nd St SE, south on 10th St SW and east along 9th Ave) by 6am. The march takes two hours, and involves around 150 entries, 4000 participants and some 700 horses. 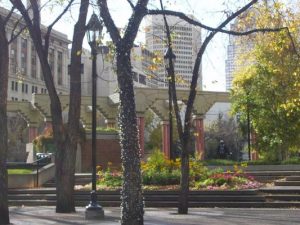 For the rest of the Stampede the Olympic Plaza in downtown (known as Rope Square for the duration) offers free pancake breakfasts daily (8.30-11.30am) and entertainment every morning. Typical events include bands, mock gunfights, square dances, native dancing and country bands. Square dancing also fills parts of Stephen Avenue Mall at 10am every morning. Nightlife is a world unto itself, with Stampede locations giving way to music, dancing and mega-cabarets, which involve casts of literally thousands. There's also lots of drinking, gambling, fireworks and general partying into the small hours. Barbecues are the norm, and even breakfast is roped into the free-for-all - outdoor bacon, pancake and flapjack feasts being the traditional way to start the day. "White hatter stew" and baked beans are other inevitable staples.

Stampede's real action, though - the rodeo and allied events - takes place in Stampede Park , southeast of downtown and best reached by C-Train (every 10min) to Victoria Park-Stampede Station. This vast open area contains an amusement park, concert and show venues, bars and restaurants and a huge range of stalls and shows that take the best part of a day to see. Entrance is $8, which allows you to see all the entertainments except the rodeo and chuck-wagon races. Things to see include the aboriginal village at the far end of the park, where members of the Five Nations peoples (Blackfoot, Blood, Sarcee, Stoney and Piegan) set up a tepee village (tours available); the John Deere Show Ring, scene of the World Blacksmith Competition; the Centennial Fair, which hosts events for children; the Agricultural Building, home to displays of cattle and other livestock; the outdoor Coca-Cola Stage, used for late-night Country shows; and the Nashville North, an indoor Country venue with bar and dancing until 2am.

If you want to see the daily rodeo competition - bronco riding, bull riding, native-buffalo riding, branding, calf-roping, steer-wrestling, cow-tackling, wild-cow milking and the rest - you need another ticket ($8 on the day), though unless you've bought these in advance , it's hardly worth it: you'll probably be in poor seats miles from the action and hardly see a thing. Rodeo heats are held each afternoon from 1.30pm for the first eight days, culminating in winner-takes-all finals on Saturday and Sunday . If you want to watch the other big event, the ludicrously dangerous but hugely exciting chuck-wagon races (the "World Championship") you need yet another ticket  on the day, though again you need to buy these in advance to secure anything approaching decent seats. The nine contests are held once-nightly at 8pm, the four top drivers going through to the last-night final, where another $50,000 awaits the winner.

It's worth planning ahead if you're coming to Calgary for Stampede. Accommodation is greatly stretched - be certain to book ahead - and prices for most things are hiked for the duration. Tickets for the rodeo and chuck-wagon races go on sale anything up to a year in advance. They're sold for the Stampede Park grandstand, which is divided into sections. "A" is best and sells out first; "B" and "C" go next. Then comes the smarter Clubhouse Level (D-E are seats; F-G are Clubhouse Restaurant seats, with tickets sold in pairs only). This is enclosed and air-conditioned, but still offers good views and the bonus of bars, lounge area and restaurants. The top of the stand, or Balcony (J-K) is open, and provides a good vantage point for the chuck-wagon races as you follow their progress around the length of the course. Rodeo tickets range from about $17 to $35, chuck-wagon races from $17 to $40; tickets for the finals of both events are a few dollars more in all seats. For ticket order forms, advance sales and general information, write to Calgary Exhibition and Stampede, Box 1860, Station M, Calgary, AB T2P 2L8 (tel 261-0101, elsewhere in Alberta or North America tel 1-800/661-1260) or call in person at Stampede Headquarters, 1410 Olympic Way SE, or the visitor centre. Tickets are also available from Ticketmaster outlets (tel 270-6700).